The History of Mothers Day

When did 'Mothers Day' actually begin? Which heavenly soul was it that first thought we should spend an entire day celebrating our Mums?

Way back in 1908 a woman by the name of Anna Jarvis founded the idea. She hailed from Pennsylvania in the United States. Her mother, Ann Marie Jarvis, was widely known as a social activist and had great impact in unifying her local community during the day of the American Civil War (a mother worth aspiring to). Over time business saw the opportunity to commercialise the holiday and the focus shifted from genuine appreciation and quality time spent with loved ones to a day of rampant gift giving and spending. This shift in the publics perception ended up in Anna trying to remove the holiday from the calendar!

We could go even further back to the time of Zeus and the Greek Titans. The great thing about the Greeks was they had a god for virtually every part of the human psyche. Not just the good parts but the worst parts as well (we won't go there today).

One of Zeus' favoured lovers was a goddess by the name of Leto, the goddess of motherhood. During Leto's pregnancy Zeus' recently married wife Hera pushed Leto out of Olympus. Essentially, Hera was hugely jealous that Zeus had a lover prior to her and even tried to have Leto killed by a dragon. Talk about a grudge! The other goddesses rallied around Leto and supported her during childbirth. 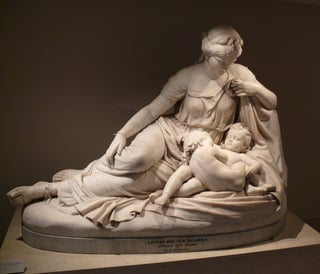 Leto gave birth to twins (pictured above). Artemis, sister to Apollo and the goddess of the natural environment, chastity, virginity and the moon and Apollo, the god of music. 2 beautiful little cherubs that had their own journey through Greek mythology as they stood to protect and avenge their mother.

Mothers day also has various roots in all kinds of cultures around the world. Ranging far and wide we all love and respect the work that our Mums have devoted to raise us.  However you decide to celebrate your mum, whether that is gifting her with some pyjamas or simply spending some quality time with her, the gift of motherhood is a personal experience that should be cherished and celebrated however you feel it should.

Let Us Know What You Thought about this Post.

When is Mothers Day?

Pyjama Dressing is here to stay

When is Mothers Day?